How to prune your fruit trees

After a long (and still on-going) winter many people are getting anxious to prune their fruit trees. The good news if you live in NW Montana, is that you’ve got time before the trees start to leaf out.

It’s important to keep in mind that if you neglect to prune and train a standard size Apple or Pear they can easily grow in excess of 25′ tall and wide. Most Cherries, Peaches, and Apricots are not quite as big but they will grow to 25′. So it’s important to commit to pruning your fruit trees especially at an early age in order to keep them productive and manageable as time goes on. 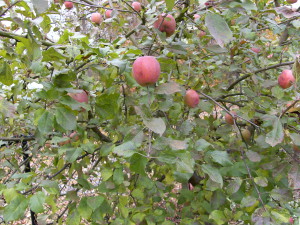 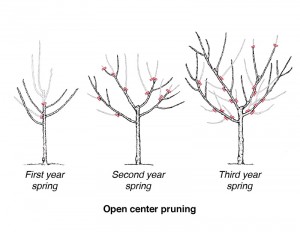 With young trees you need to promote a network of fruit bearing branches, give our take a half dozen, that are horizontal and equally spaced apart from one another so as not to crowd or shade each other and starting at a height from the ground of roughly four feet. Most trees bought at the nursery already have a few limbs established so all one needs to do to maintain height, spread, and develop an open canopy is a lot of ‘tipping’, cutting vegetative shoots down to an outward pointing bud, shoot, or branch. Doing so forces them to expand outward and not back in towards the center of the tree. Tipping vegetative (non- fruiting) growth on Apples and Pears will also help stimulate the development of fruit bearing wood or “spurs”. 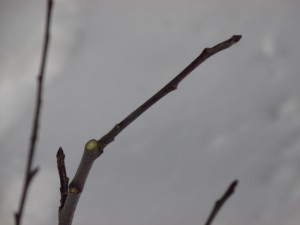 Once you have your major fruit bearing branches establish you need to just continue to allow them to grow and develop but  keeping the height and canopy spread in check by “tipping” shoots back to an outward facing bud along with removing shoots that are growing into other branches or the center of the tree.

More often than not I am asked to prune established trees that have been neglected for years then pruned very hard resulting in a profusion of upright water- or non fruit producing- sprouts. When left alone they grow rapidly shading lower branches, which prompts the owner to remove all that growth year after year often resulting in very little or no fruit. It has always been my approach to selectively remove maybe three quarters of those sprouts then train, by tipping them down by two-thirds, leaving 3-4 buds, so that  they will eventually produce fruit. This approach takes several years to reduce the overall amount of annual water sprout growth but the goal is less pruning and more fruit production.

There are many instances when people have asked me to prune their 20+ year old fruit tree that have for the most part been left alone and are quite large and have good shape. Those are times when it is best to leave well enough alone. Radically reducing the overall size and shape of any tree will only lead to prolific sprout growth and possibly stressing the tree, just what you don’t want. I approach those trees with pruning out only what is necessary; dead and diseased branches (always a good thing), branches that crowd more productive branches, perhaps ‘heading’ back branches that may be too long to an appropriate size lateral branch, all in all keeping the pruning to a minimum. If some of the fruit is too high to pick well that’s ok….isn’t it?