Invasive Insects and Diseases Are Killing Our Forests

Invasive Insects and Diseases Are Killing Our Forests

Mr. Popkin is an independent journalist who writes about science and the environment. He has written extensively about threats to trees and forests.

In the past 120 years, voracious insects and fungi have swept across North America with frightening regularity, laying low the chestnut, the elm, the hemlock and, most recently, the ash. Each of those trees anchored natural ecosystems, and human economies and cultures. And while climate change and wildfires grab the headlines, invasive species have so far proved to be a far greater threat to forest biodiversity in the temperate world.

These plagues have also amplified climate change. Research has found that rotting trees killed in the United States by forest pests release carbon dioxide into the atmosphere at a rate within the same order of magnitude as wildfires.

Much as we were unprepared for the virus that has killed more than 450,000 people in the United States and 2.2 million worldwide, we’re not ready for the next tree pandemic either.

Tree plagues differ from human ones in a few important ways. On the plus side (from a tree’s perspective), insects and diseases are often specific to a genus, so no plague can hit every tree at once. On the minus side, as Gary Lovett of the Cary Institute of Ecosystem Studies points out, people can stay indoors and get immunized, but trees “have to stand there and take it.”

In many ways, however, tree plagues are surprisingly similar to human ones — and these similarities can help us manage both types of threats.

Human and tree plagues move around the globe via travel and trade. Columbus and other European explorers brought smallpox, measles and other viruses to the New World starting in the 15th century, and viruses have been leaping oceans ever since. Columbus’s arrival also set in motion an often cataclysmic biological reunification of Asian, European and American flora. People crossing oceans brought not only new pathogens, but also new plants — and their retinues of insects and microbes.

In the millions of years since the continents separated from what had been larger land masses, trees like chestnut and ash had diverged into distinct species that provided sustenance to specialized communities of insects and microorganisms. Trees evolved defensive chemicals — a sort of tree immune system — to keep all this feeding at manageable levels. That’s why, for example, white oak trees can sustain more than 500 caterpillar species while retaining enough leaves to feed themselves.

The trans-ocean movement of tree species upended things. Occasionally, a pest landed on a tree similar enough to its host tree to be digestible, yet dissimilar enough to lack defenses against the pest. In the early 1950s, for example, woolly adelgids from Japan were discovered in the United States. The tiny insects found the sap of Eastern hemlocks delicious and began to multiply, decimating hemlock trees. By the time the problem raised alarms in the 1970s, the outbreak could not be contained. It may be thousands of years before the hemlock regains the abundance it had a mere five decades ago.

Scientists in 2007 examining some of a Massachusetts park’s hundreds of 300-year-old hemlock trees that were dying of an infestation of woolly adelgid. Credit…Dina Rudick/The Boston Globe, via Getty Images

This story of the hemlock infestation highlights a second parallel to human pandemics: There’s usually a lag between when tree plagues begin to take hold and when they become noticeable. Once established, they become extremely difficult to eradicate and can cause billions of dollars in damage.

And new tree pandemics continue to strike. In California, sudden oak death, a disease caused by a nonnative fungus-like pathogen, was first noticed in the 1990s. It has killed millions of trees and had “devastating effects on coastal forests in California and Oregon,” according to a state task force in California.

Ash trees have been decimated by the emerald ash borer, an Asian beetle that first struck in suburban Detroit in the early 1990s. It has since killed hundreds of millions of trees and threatens the 16 known ash species native to the United States, plus the insect species that feed on them.

Then there is the spotted lanternfly, native to East Asia, which is thought to have arrived in Pennsylvania in 2014 and is demolishing orchards and vineyards at a cost of millions of dollars a year.

Perhaps the most straightforward measure to address this would be to stop importing trees and plants. But that’s unlikely to happen. The horticulture industry, which generated more than $4.5 billion in sales of nursery stock in 2019, according to the Agriculture Department, has long thrived on offering customers a profusion of plants from around the world.

Regulators have instead developed risk-assessment protocols and banned or quarantined imports of some trees and woody plants known to harbor dangerous pests. These measures have helped, but the United States’ plant protection system remains leaky.

Because pests usually specialize on a single plant genus like oak or maple, Dr. Lovett recommends banning imports of close relatives of native trees. Recent innovations have given scientists even more precise tools to identify new insect or pathogen threats. By planting trees native to the United States and Europe in China, for example, researchers have discovered insects native to Asia that could do major damage to American or European trees.

Similar experiments are underway to identify threats to Asian trees from elsewhere. International trade of trees those insects live on could be restricted. 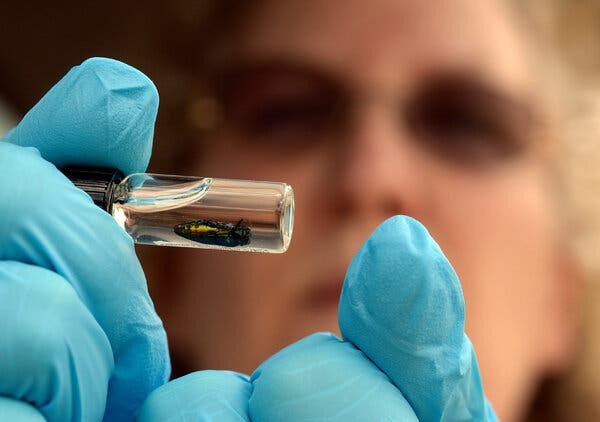 The emerald ash borer, a Asian beetle, has killed hundreds of millions of trees and threatens the 16 known ash species native to the United States.Credit…Cyrus McCrimmon/The Denver Post, via Getty Images

Regulating live plants won’t be enough. The emerald ash borer and another destructive invader, the Asian long-horned beetle, hitchhiked to the United States not on live trees but on wooden packaging material used to move freight. The spotted lanternfly is thought to have arrived in egg form on landscaping stone. Regulators have responded by requiring wood packaging to be heat-treated or fumigated. Requiring shippers to use alternate packing materials could be an even more effective solution.

And just as coronavirus testing has been insufficient, so have inspections of incoming shipments for insects or diseases that could attack trees. Only a small fraction is inspected. Still, live insects are detected in an average of some 800 shipments annually, according to calculations by Faith Campbell, president of the Center for Invasive Species Prevention. An unknown number slip through.

We also have a role to play, by being responsible consumers and transporters of plants. Andrew Liebhold, an entomologist at the Forest Service, told me he worries about pests hitchhiking on exotic plants carried on airplanes by travelers in luggage, which is barely inspected at all. He is also concerned about the boom in e-commerce, which the pandemic has, if anything, increased. “You can buy all kinds of weird plants and have them sent to you,” he said. “It’s a very difficult pathway to control.”

In recent years, a chorus of voices — including ecologists and public health experts — have called for preserving forests and trees to head off a host of ills, from urban heat stress to global climate change and human pandemics. Indeed, it has become clear that deforestation increases the chances that humans will be exposed to more dangerous pathogens.

But far less attention has gone to stemming the expanding tide of plagues that humans, through ballooning global trade, weak regulatory systems and sheer carelessness, have inflicted on trees. If we want forests to protect us, we first need to protect them.

Gabriel Popkin is an independent journalist who writes about science and the environment. He has written extensively about threats to trees and forests. He also leads tree identification walks in the Washington, D.C., area, where he lives.

The Times is committed to publishing a diversity of letters to the editor. We’d like to hear what you think about this or any of our articles. Here are some tips. And here’s our email: letters@nytimes.com.